Almost 3% of crude oil is a source of raw material (feedstock) for making plastics, and almost another 3% is used for its manufacture. That is 6% of global oil consumption, a figure expected to grow to 20% by 2050 on current trajectory (PDF). Polyethylene (PE) and isotactic polypropylene (iPP) constitute nearly two-thirds of the world’s plastic. Despite their similar hydrocarbon makeup, the polymers are immiscible with one another. Indeed, only 2% of 78 million tons of manufactured plastics are currently recycled into similar products. A big driver for recycling plastic materials challenges.

Researchers of the Institute of Biomedicine and Biotechnology of Cantabria in Spain may have found a solution to plastic biodegradation. Indeed, a caterpillar, commonly known as waxworm, was able to breakdown the plastic, transforming the polyethylene into ethylene glycol. Waxworms commonly live in beehives and may use enzymes in their gut or saliva to degrade the plastic in the same way as they attack beeswax. 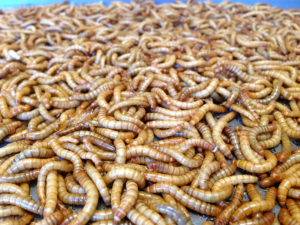 “We have found that the larva of a common insect, Galleria mellonella, is able to biodegrade one of the toughest, most resilient, and most used plastics: polyethylene,” says Federica Bertocchini

If this chemical process is caused by a single enzyme, it may be possible to reproduce it on a large scale for use in existing plastic recycling plants. Researchers released one hundred waxworms on a plastic supermarket shopping bag, and over twelve hours, the waxworms consumed 92 mg of the plastic. This is 1.500 fold better performance compared with previous trials using bacteria, in which only 0.13 mg of plastic was consumed in 24 hours.

mealworms fed a steady diet of expanded polystyrene were as healthy as controls eating a normal diet.

Other larvae, like Indian mealmoths had also shown plastic bioremediation activities. The work of Stanford University found that 100 mealworms, the larvae of the mealworm beetle, Tenebrio molitor, could munch their way through up to 40 milligrams of expanded polystyrene each day. Researchers have shown in earlier research that waxworms, the larvae of Indian mealmoths, have microorganisms in their guts that can biodegrade polyethylene.

Scientists from the World Agroforestry Centre (ICRAF) and the Kunming Institute of Botany in China have recently identified a fungus which could help deal with our waste problem by using enzymes to rapidly break down plastic materials.

Aspergillus tubingensis is a fungus which ordinarily lives in the soil. In laboratory trials, the researchers found that it also grows on the surface of plastics. It secretes enzymes onto the surface of the plastic, and these break the chemical bonds between the plastic molecules or polymers. 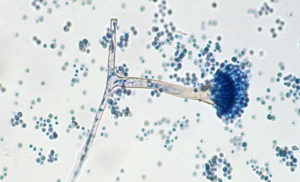 The team found that the fungus also uses the physical strength of its mycelia – the network of root-like filaments grown by fungi – to help break apart the polymers. Even plastics which would otherwise persist in the environment for years can be broken down by A. tubingensis in a matter of weeks, the scientists say

Polyethylene (PE) and polypropylene (PP), which account for two-thirds of the world’s plastics, have different chemical structures and thus cannot be repurposed together. Or, at least, an efficient technology to meld these two materials into one hasn’t been available in the 60 years they’ve both been on the market.

In addition to these bioremediation studies, Eagan et al., from Cornell Univesity, have developed a solution with a more chemical approach. Plastic polymers can weld common grades of commercial PE and iPP together, depending on the molecular weights and architecture of the block copolymers. Researchers developed a tetrablock copolymer that shows better mechanical properties. Indeed, interfacial compatibilization of phase-separated PE and iPP with tetrablock copolymers enables morphological control, transforming brittle materials into mechanically tough blends.

Generally speaking, plastic is incredibly resistant to breaking down. That’s certainly true of the trillion polyethylene plastic bags that people use each and every year. Plastic is non-biodegradable, and it is estimated that 8 million metric tonnes of plastic pollution enter the ocean each year.

Ikea is investing in a plastic recycling plant in the Netherlands

IKEA in a commitment to sustainability has acquired a 15% minority stake in Dutch plastic recycling plant Morssinkhof Rymoplast. IKEA objective is to ensure that its plastic products, which account for around 40% of the total plastic used by the company, are made from 100 % recycled or recyclable materials, by August of 2020 (Sustainability Report). “What we do at IKEA has a big impact on the environment because we work with large quantities. By using recycled materials, we can produce more sustainably,” says Anna Granath, product developer at IKEA.The investment is considered to be a part of IKEA’s strategic plan to invest in innovative technologies and companies that could deliver positive sustainability and commercial benefits.

Excellenting is a specialized database, gathering results which cover the value chain of Innovation from lab results to marketable products. Join us today and link your R&I offers or demands with stakeholders, meet your goals for each development stages.